Leaving early Friday morning. I am no where near ready and starting to have an anxiety attack. I just want say screw it and not go. I really can be my worst enemy (all though I think that is true for most of us.

I still have cleaning and packing to do. I have to finish up a list of information for the pet sitter. I also need to give one of the local vets Bullet’s information in the case of an emergency. This really is nothing compared to what is running through my head.

I am going to try to remember to post while we are on vacation. It will be posted immediately rather than scheduling though. Or, maybe, I will save the good stuff till we get back. I have a couple things I could publish.

Just in case I forget though. Merry Christmas and Happy Holidays!

While Galaxy has not been top of the notch. I was having a pretty good streak of luck. Until I slipped. Nothing major happened (which I am very much thankful for) but I have a nice black finger nail just in time for holiday season.

I was walking to the living room in the middle of the night and slipped on some liquid that was on the tile. As I was sitting there in some pain and wondering what the hell happened. I started to freak as I thought one of the dogs peed on the floor. It was not pee to which I am very happy about. I, all of a sudden had this terrible pain in my finger. I got in the bathroom, got the light on, and there is blood running down my hand and arm. To say the least, I bawled my eyes out as I was rinsing my hand off in the interest of getting it clean. Also to see where the bleed was coming from.

Not feeling any better I did decide to wait till morning to see how my finger was doing. I guess just hoping the swelling would be down and it would not be throbbing anymore.

This was taken 7.5 hours after. It does not look quite so bad looking at it now. Extremely tender and throbbing though. This is when I decided I had to see a doctor. Unfortunately walk-in was booked up which left the ER. My doctor is in another town and there was a risk of a fracture. I spent about 6 hours in the ER. Thankfully there is nothing more than bleeding but they said I will lose the nail. I am okay with that. Really things could be much worse. 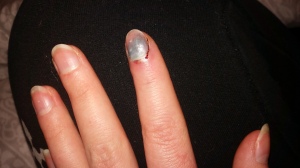 This one was taken 17 hours later. I was hoping that this was as bad as the nail was going to get.

I was wrong though over 36 hours later and there is still swelling. My nail is also becoming more black. There clearly is a lot of blood putting pressure against the nail. At this point I just hope my nail is still healthy to grow back.

It sucks that we are going away for Christmas and I get this ugly thing. Maybe I am just getting all that could go wrong out of the way now. There is lots for me to worry about on the trip. We have only spent a day together and to be honest I cannot remember if it was a full day. He works everyday so we get to spend a few hours in the evening and the rest is sleep. Can we handle, all of a sudden, seven days together?

Between Galaxy and I, things have been interesting. Lets start with Galaxy though. A couple months ago I did a phone consult with the vet on what was going on with her scratching. We opted to change her food ($110.00CAD per bag) and that did not seem to do much. She was on it for four weeks before the annual appointment. All kinds of skin scraping’s and test showed nothing. We were told to change her food again to something much more hypo-allergenic ($150.00CAD per bag). Not so exciting when it comes to budgeting.

She has also been on medication since the appointment. She received a topical dose of de-wormer, two horse sized oral de-wormer pills, oral antibiotics, and a form of steroid. She has been on the antibiotics and steroids for two weeks now. I have to tell you it is like having the old Galaxy back. Feels like a miracle! She has another two week round of antibiotics. I am hoping she is not having an allergic reaction and the antibiotics have killed whatever may have been bothering her. The steroids are now half a pill every two nights. I am hoping to bring the dose down even more before we go on holidays.

This is after the vet appointment. You can see she rubbed the hair out from around her eyes. Plus, you can see how red her skin is. This was taken November 29 2016.

This was taken December 13 2016. It is obvious that her skin is much better. The hair will take some to grow back though.

She has not been scratching. Maybe a little here and there but no more than a healthy dog would. Her pads seem to be tender in the snow as well. Although it does not help that we have had -20C to -30C for a while yet. 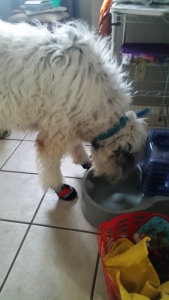 She has such tiny feet for a dog that looks so big. They even match her winter jacket!