I almost forgot about this! Which is horrible since Sunday is such an easy day. My weekend also was not as productive as I hoped it would be but there is nothing I can do about that now. Just try to be better the next. 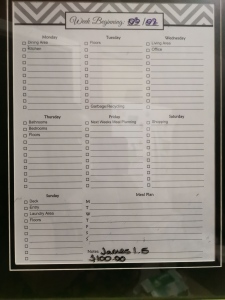 This is my weekly cleaning schedule and also for supper meal planning. There is no meal planning this week though. Maybe one day….

Now with Sunday we have the deck, entry, laundry area, and floors. Right off the bat I can tell you the deck is not being done. It is simply just to cold outside. I also did not get the floors done either since there is so much crap in the way every where. Reality is that the house should be picked enough for me to do a quick vacuum and wash. Lets see the before and afters.

Not that bad really. A few groceries to pick up and move to the kitchen. I need to put a way our outerwear. I am also going to wipe a few things down with a water, vinegar, and essential oil mix. 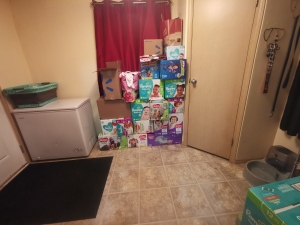 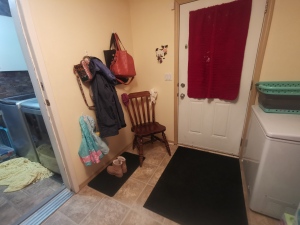 I mean it does look better. The wall of boxes are donations that I need to drop off eventually. Until then I just keep adding to the pile. The blue basket that is on top of the deep freeze is stuff that needs to go to the shed. I store all the too big clothing out there and NaiNai sends a lot of stuff for her Granddaughter. The couple boxes by the microwave are going to a clients as they are having a baby and I thought I would help out. I also have a second Christmas Cactus as I have killed the one Missy got when she was born. I have to move it out in the summer so it does not get sunburned.

Laundry area is pretty simple as well. Just needs to be picked up and a quick wipe down. 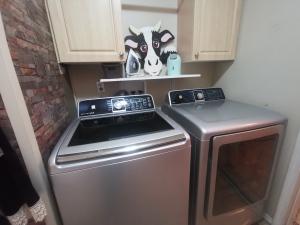 The iron is still there as it needs to go to the recycling. I did do a quick vacuum of the floor and the entry way. I switched over the laundry and pretty much moved everything off the floor.

That really is all I got done ha-ha

I also said I would include a copy of my ‘Got Done’ list. You can actually see my entire weekend. I had an appointment on Saturday so I went to that, went to help a client get paperwork together for their other accountant, and grocery shopping. We did nothing really Sunday morning. After Missy’s nap, we went and gave Grandpa his birthday card. I lazed on the couch until I remembered I was going to do a blog post.

Now this bad boy has been very picture heavy. I also know it was not overly exciting. What I am going to do is include the before pictures from when I was going to try to do this short series. You want to talk about real life in such a small place. Those are it. I just had a good week this time. 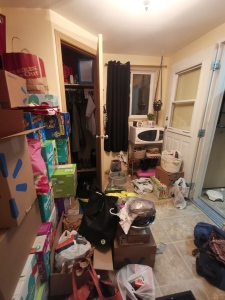 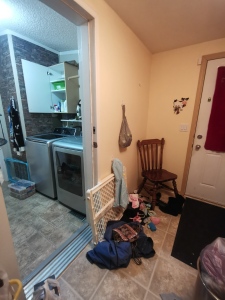 This was only a week ago. After another day off shopping. It is also a lot of other junk from a build of other weeks. You can see where I need to break some bad habits though. Like putting the shopping a way immediately. Or putting parcels a way once I open them. It is so hard when the rest of your house is in disarray though and I think a lot of you can understand that.

Monday we have the kitchen and dinning area. That will be quite the job compared to every where else. Something to look forward too!

Now I was planning on doing this last week and that fell apart quickly. I want to do a week following my cleaning schedule… my attempt to keep the house together anyways. I have used this style in the past when I lived in the duplex and I liked it a lot. I just need to get back in the habit of it is all. My weeks start on Sunday. So, Monday I will post what was done on Sunday and what was not done of course. I will also include my ‘Got Done’ list. Something I really like but has not become a habit yet. I want to give it one more real shot.

Now I do not list something to clean every day because it is nice to just have a break or to deal with something that would take a way from what is listed. I also want to include my ‘Got Done’ list because I may not get a room completely done but I may have done a lot of other things that day. For example, last Sunday I did start doing what was ‘scheduled’. I than realized how earlier it was still in the evening/night so I decided that I should put the paint colour on Missy’s walls. That took about six hours. The next two days I was down for the count. My shoulders were completely killing me. I was too far behind to continue with the plan.

Now while I brought up Missy’s room. I do have it half way done. After I finish the last bit of painting I will make a post about the progress. The second post after that will be the putting together of her room. That one may end up in two parts as I will be ordering (well NiaNia will be) some bookshelf things once I know the space and area I have to work with.

Lets all have a week where we seem to have our ducks in a row!

I will not be going into much detail here. This picture is from earlier this year. All of this stuff was in Missy’s room (she still is co-sleeping in my room). All of this was ‘crap’ that I needed to get out. Everything went to a local thrift store. This included all sorts of home items, pregnancy items, baby items, and clothing. The printer went to the local recycling facility.

I am always amazed at how much things pile up. Things also tend to pile up as I am a procrastinator. I am trying to give myself a limited spot for donations. More to force myself to deal with it. I do not have the problem where I will go back and take the item out of the box. But that box gets full and I make a second one and that ends up in the way somewhere in the house.

I have also taken a full load of items to our local pregnancy care centre. A mix of items that Missy has outgrown, to big to use, or we will not get around to using it before it expires and a few boxes of pampers.

Okay so there is not a lot that needs to be done in the living room. However the space behind the couch still holds quite a bit of stuff that actually belongs in the office.

I do not actually touch the boxes behind the couch but as you can see here the baby swing started to just catch things.

*I have since given the white mouse to my Mother. 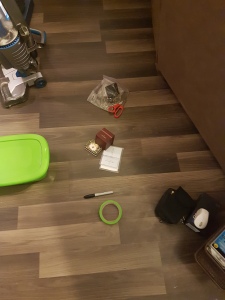 The items in a line in the middle do not have a place to go. That is not 100% true. The tape I use to label food storage and I was using the Sharpie for that. I have moved them to the tool box.

This small pile of stuff was relocated to the office and has not been put a way yet.

All of these items are going. It is not much but hey unneeded items tend to add up very quickly.

The last few things are kind of an action need before being dealt with. There are a couple things that belong in the car. The phone I need to plug in and reset. Once that is done I will take it in. The cord that is still in waping is for my personal computer. Not sure if that computer still works. If the computer does not work than I will get rid of the cords.

The baby swing is also being donated because it takes up an insane amount of space! Especially since Missy is to big for it.

Something that has been stopping me in my office and causing me grief has been my personal paperwork. I did not have a place to put these things and the piles were everywhere. Literally everywhere in the house. One day I said ‘screw it’ and went out to purchase whatever filing cabinet I could from the local Staples.

Now the first place I started was mine and Mister’s tax returns. I did have them in another place but I wanted to put them in the filing cabinet. The reason I opted to move these first was because I knew there were NOA and what not mixed up in these piles and they needed to go with their corresponding year. In the above picture are the folders I had my taxes organized in up until 2015 I believe.

The entire bottom drawer is taxes and nearly full. I did not have tabs at this point so I just marked all of the hanging folder with whatever stickies I could locate. I also did not have folders (the ones I have in my office are for clients).

This lid did not contain much but I started with this box and moved onto the sorter that is on top of my desk (no picture). Which was stuffed full!

This basket was also over flowing with paperwork. As you can see though I had emptied it. I started putting my manuals here.

This ended up being my pile of recycling. 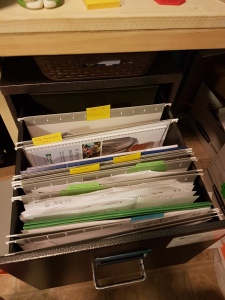 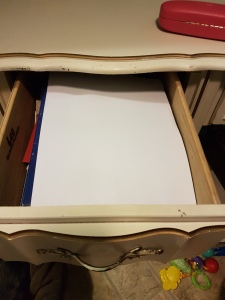 I did work on emptying out the desk the night after. Why I only took pictures of two out of three drawers I have no idea. But they were all full. I also want to get the desk out of the way. I am repainting it and using it as my vanity. Plus, it was just simply in the way. I cleaned off the desk top and emptied out the drawers. Desk was moved out to the shed in the mean time. 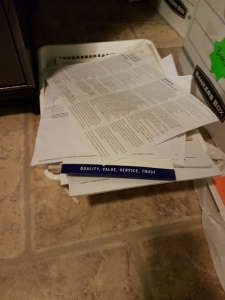 Now at this point my basket of manuals has grown ha-ha. Before you say I can get these online. I am aware of that but I honesty like having them immediately on hand. 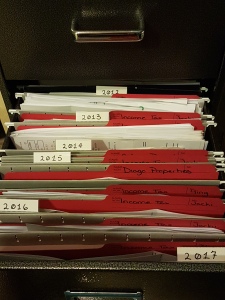 In the end I got tabs for the folders. I also got folder to micro-organize.

I know it is not very exciting for photos and I am getting this together so that you can also watch a video of it if that is your thing. Despite all that though it was so weight-lifting to be able to put such a big aspect of my life a way. I do even now still have to go through the manuals and I have a few more piles that have accumulated since this was done.

I want to add about my office that  I do not take very many pictures in here because I also work from home and those things do not need to be shared. So, even if I am making progress I may not be able to document it.