While I would like to say this was a long process and give some insight in to the process when there hiccups. Those things really did not happen. I do not have a long interesting story to provide you with. Everything happened fairly quick and seemed to work out in our favour. There are somethings you can only find out after living in a place though. Lets start at the beginning though.

I went into the bank for a preapproval while Mister was on a quick trip to China to help out a friend with some business stuff. I had no problem getting it. Actually I was quite surprised with the results. Maybe I am wrong but I think that was the easiest part. I am not signing my life a way or committing to anything. Just simply looking for a yes or no. Normally everything and everyone says go to multiple banks or broker. A broker can view all offers and rather than you having to go to all the individual places. I absolutely did not make a rash decision. I am a first time home buyer in a market that is becoming more difficult to get a mortgage in and as well as pass the stress test(s). I stand by my decision.

When Mister got back in the country I decided to book an appointment with a relator I use to clean house for. Took my Mother out with me the first day to check out the listing I was provided with. There was one house I was particularly fond of just from the listing. It worked out that we seen the five other homes before this one. I was very much relieved that it was not the first or I would have way over thought it. Instantly I was able to picture it being a home for our family. Exactly what we could do and in my opinion it was move in ready for us besides a few small items. Two days later I took Mister out to see three of the listings. This way he could form his own opinion… I think he still just went with whatever I wanted but I made and honest effort.

The next evening I made the offer and the countering started. In less than two and half hours we made the commitment and it worked out better than I thought it was going to. Paid the deposit the next day and contacted the bank to inform them. The longest part was waiting to hear back from the bank. It took a week and a half, it came in and I could move on.

Next came the house inspection. It was a stellar review, really. Everything that I was told was just simply things to maintain and things in his opinion we should we should think about replacing in the next couple years. Nothing expensive and nothing that causes safety issues. Last but not least was the insurance. I was able to get a letter quickly. Have the file started that way I could just go in to finish up the final details after the fact.

Signed my commitment releasing the conditions I set forth. All I had do was make an appointment with the bank to get the mortgage sorted out. I was informed normally this is already done when this point is reached but I did some of information over the phone. Only information, nothing concrete.

I made and appointment with the bank ASAP to get the mortgage information signed and done with. Once I had that appointment booked it was like every one was on fire to get things done. I had to go insurance before the bank to purchase. The reason being is British Columbia is in a state of large forest fires and they need to know the asset is covered. That day there was a doctors appointment, insurance and then the bank.

The next day I had had my notaries appointment. Where I got to sign my life a way! I also had another doctors appointment that day. Everything was very straight forward. I felt confident in understanding everything was put in front of me. I also felt like it was explained to me thoroughly. I think the hardest part was handing over that bank draft and seeing all that money leave my hands.

Truly this was an amazing home buying experience. It was not with out it stresses but I think that was mostly on me and worrying things would not get done on time. They did and I am so excited about having our own place. I do not have to worry about someone else’s property and can do whatever we want. Not a decision I regret but lets check in on that in a few months. 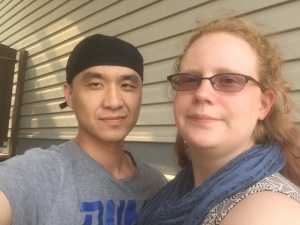