It is the New Year now and it will be a busy one for MR and I. Our second holiday spent together. The next one (if I remember right) is the Chinese New Year. Feel free to correct me if I am wrong.

We just spent a week in Vancouver, B.C. and it was a fantastic trip! We both missed the dogs though. Driving back I really could not wait to see them. I am going to be terrible when it comes to kids ha-ha.

There was business stuff that had to be done when we were down there. I got some shopping in too. Things are expensive up North and you cannot always find what you are looking for either. Not everything got done though 😦 but there is always next time I suppose.

We did not take pictures everyday. It is not something we really do and that is a shame. We did get some though. We did go to the Vancouver Aquarium which had me in a complete internal battle while we were there. We went with some friends so I stuck it though. We also had Christmas dinner at the Four Seasons. One of the two western meals we had while down there.

We spent dinner with four other people and it was very nice way to have our first Christmas together. 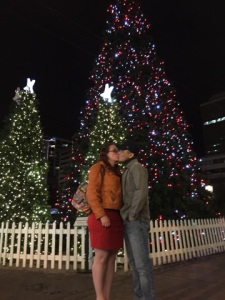 This is MR favourite photo and I really like it too. After Dinner we all decided to take photo’s in front of the trees.

The next day it snowed! It was like we were home again and on top of it we were going shopping. I cannot stand shopping on Boxing Day. The crowds are just to much for me. Besides most stores now extend their sales for a week anyways. None the less we did it and it was stressful. We also were waiting in the truck for the other couple. I seized the opportunity to talk about our future.

On the 28th we headed out to Schelet, B.C. to see my father. I have not seen him in a year and a half, he also needed to meet MR. Despite missing the first ferry and having to wait for the next one. It turned out to be a great day! 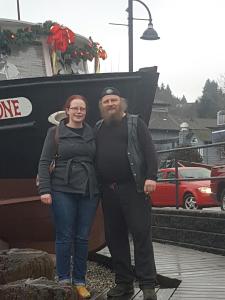 Not the greatest photo but this is the first photo of my father and I since I was little. These were taken in Gibsons, B.C.

In front of the Persephone from the Canadian hit TV series ‘ The Beachcombers’. It was a great show! Of course before my time but I have still caught many episodes of it. It is the tugboat featured in the show.

Here we are standing in front of Molly’s Reach. One of the filming locations for the show. I have a photo of me in front of here from when I was little. I will try to find it because it would be cute. Then if there are kids in the future. I would like to take a family photo in front of it again. Do a little series type thing. This place is not going any where. I mean it is still standing 16 years after the cancellation of the show.

It was just a great vacation all together. It was a good get a way and I feel like I have reset a little bit. Relaxing was hard for me to do though.