Between Galaxy and I, things have been interesting. Lets start with Galaxy though. A couple months ago I did a phone consult with the vet on what was going on with her scratching. We opted to change her food ($110.00CAD per bag) and that did not seem to do much. She was on it for four weeks before the annual appointment. All kinds of skin scraping’s and test showed nothing. We were told to change her food again to something much more hypo-allergenic ($150.00CAD per bag). Not so exciting when it comes to budgeting.

She has also been on medication since the appointment. She received a topical dose of de-wormer, two horse sized oral de-wormer pills, oral antibiotics, and a form of steroid. She has been on the antibiotics and steroids for two weeks now. I have to tell you it is like having the old Galaxy back. Feels like a miracle! She has another two week round of antibiotics. I am hoping she is not having an allergic reaction and the antibiotics have killed whatever may have been bothering her. The steroids are now half a pill every two nights. I am hoping to bring the dose down even more before we go on holidays. 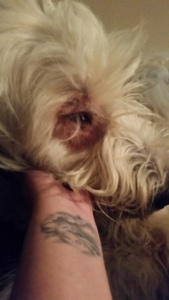 This is after the vet appointment. You can see she rubbed the hair out from around her eyes. Plus, you can see how red her skin is. This was taken November 29 2016.

This was taken December 13 2016. It is obvious that her skin is much better. The hair will take some to grow back though.

She has not been scratching. Maybe a little here and there but no more than a healthy dog would. Her pads seem to be tender in the snow as well. Although it does not help that we have had -20C to -30C for a while yet.

She has such tiny feet for a dog that looks so big. They even match her winter jacket!